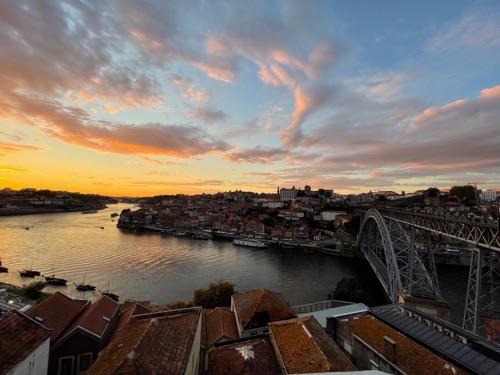 Porto with the Freedom Chair

Our besties from the States Larry and Pamela like to spend a week together with us somewhere in Europe every other year or so.  We have visited together in Caldas da Rainha, Venice, Lagos, Lisbon and Sevilla.  Of course there had been a moratorium on the visits during the pandemic. This year instead of hotels or staying with us in Lagos we decided to rent an apartment together for five days in Porto. No one except Kevin had been there before and he only vaguely remembers the two days he spent there almost forty years ago.

The apartment is a world heritage site in the historic centre of Porto and were assured it was accessible. Kevin and I decided to take the train from our home in Lagos.

I recently purchased a foldable lightweight electric wheelchair (23 kilos) as many airlines, buses and trains have limits to the size of your scooter or wheelchair.

My everyday mobility scooter is very heavy duty, great for zipping around the bumps, hills and cobblestones and even some trails. It makes it easy to run errands and have fun in my Lagos home, but simply too big for public transportation and travel. This trip to Porto was our first big experiment using the fancy new electric wheelchair called the Libercar purchased from Accessible Madrid.

To travel to Porto, Kevin and I first boarded the Algarve regional train at Lagos. This train travels from Lagos to the capital of the region Faro, then east to Vila Real de Santo António. It is not at all accessible and no assistance or ramps are provided for boarding a people with reduced mobility. We struggled and with the help of other passengers and managed to board the train from Lagos to Tunes where we could catch the Alfa Pendular to Porto.

What a difference!  The Alfa Pendular runs up the west coast and only stops at major cities traveling at speeds over 200 kmph. The staff was friendly and helpful, a ramp folds down then lifts me up to spacious seats reserved for disabled travelers.  On board was a really nice cafe, surprisingly the food and drinks were not at all overpriced, we settled for a sandwich and a split of red wine. We watched Portugal whiz by in comfort from the window, in a few short hours we were in Porto. Attentive train conductors safely helped me down at Porto Campo station.

The apartment had a pick up service. Our host easily put the wheelchair in the trunk of the car and took us to our Porto “home”.   Larry and Pamela were there and stocked the kitchen with essentials, We snacked with some great Douro wine, reminiscing and laughing. When you have been friends for over four decades there are a lot of fun stories to tell. 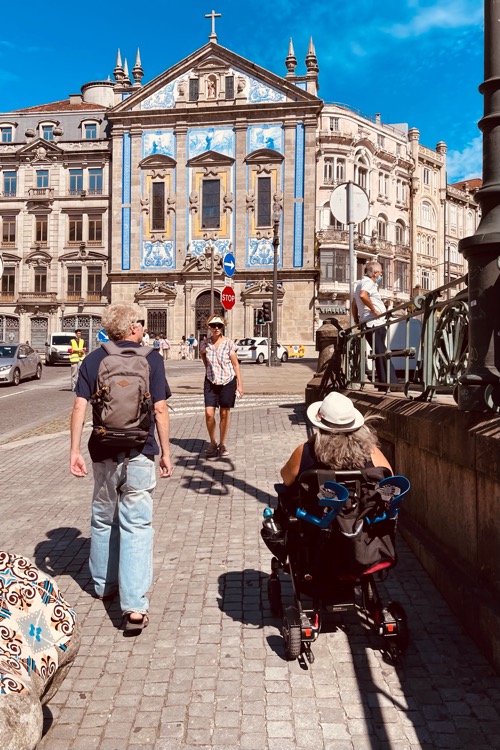 Trying out the Libercar in São Bento.

The next morning we went exploring for the Mercado do Bolhão in its temporary space while the original is spruced up.  Even temporary, it was charming with lots of yummy fruit and vegetables, cheeses, fresh seafood, handicrafts and sweets.  Lunch at a food stall was an insanely good fish soup for Kevin and I, nice big bowls with fresh bread.

It was a big learning curve for me to navigate the city with the new wheelchair, rides nicely on smooth flat places but a bit frightening on the hills in a big medieval era cityscape.

The Victorian inspired Cristal Palace garden is a large landscaped city garden designed in the 1800s.  Kevin and I strolled the paths around fountains, huge trees, flowering beds and breathtaking views of Porto, Gaia and the Douro river.  There are some levels I had to use the crutches to climb steps and Kevin carried the wheelchair up for me.

At a shady, statue studded garden we had a picnic alongside locals. We enjoyed fresh figs, cheese and olives from the market. We easily spent a couple of hours discovering beautiful “secret nooks and crannies” that make up this spectacular public garden.  At the edge is an arena which was open for accessible bathroom breaks, also a nice cafe for refreshing adult beverages.

Wandering through Porto, we soaked up the hand crafted tiles covering the buildings, navigating curbs and construction.  Looking up at the Igreja do Carmo inspired us to look for an accessible back door, too many stone steps in the front.  On the left of the building a path led us to a ramped doorway into the ornate 18th century church.  A small chapel was built from the bones and skulls of monks, not that unusual in Portugal’s ancient churches.  Above the altar was an imposing realistic crucifixion and the ornate stained glass, stations of the cross and altars of the Saints were majestic. Entrance was free.

Around the corner was Livraria Lello, this might be one of the most photographed bookstores on earth. There was a long line to get in and only the lower floor is accessible, we decided to give it a miss and look at the photos on google. Entrance is five euros.

Back home the four of us relaxed while planning our first real dinner out, so many great choices.  Our Portuguese friends tell us Polvo (Octopus) is a must when dining out in Porto.

Just before this trip Kevin had been in England for a family emergency and while on his way home he offered to help some Portuguese people at a bus stop in Exeter. One of them a native of Porto recommended the Polvo com Amejoias (Octopus and Clams) at the Casa Adão in Gaia.

Kevin and I took a taxi and Larry and Pamela walked across the river via the Dom Luís bridge. During our pre dinner sunset stroll and roll along the riverfront we wandered into the Casa Portuguesa do Pastel de Bacalhau. Here you can watch chefs make codfish cakes and sample sheep’s cheese from the Serra da Estrela.

Historically, and today Gaia is where the Douro Valley’s port wines end up.  Big warehouses for every type of Port you could imagine.  The river has floating replicas of colorful boats loaded with wooden barrels that were used to ship the fortified wine from the wineries to England and beyond.  Outside, our riverside table had a fabulous view of the Douro and Porto at night.

We had the best polvo (octopus) we’ve ever had in Portugal or anywhere,  the Casa Adão had not disappointed.  Great hospitality and humor from all at this family owned gem, followed by port of course while discussing which was the best dessert…we tried them all. 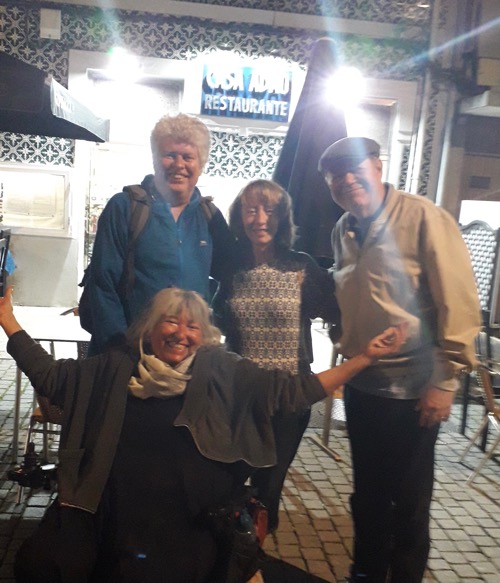 I became a bit more confident using the wheelchair around town.  The next day we took a city bus to Matosinhos, a lovely ride to the beach. Our neighbor in Lagos grew up there and still has the family home, we had promised to visit.  It wasn’t the summer season so it was nice and quiet.  Everything was going smoothly with the wheelchair.  We played on the beach, looked around and had a terrific lunch, charcoal grilled fish finished with a generous pour of 1920 Brandy, there was after all a slight chill in the sea air.

The bus to take us back to the apartment arrived and the ramp was broken. The driver just shrugged and told us to wait, the next bus was in an hour.  Oh no, I was getting on that bus!  With the help of Pamela and Kevin I crawled on that bus with the wheelchair lifted by Kevin on after.

A bit bruised and bloody soon we were in the apartment enjoying a well deserved glass of wine. I pledged to invest in bike shorts to wear under my frocks, let us just say the other bus passengers got an eye full. We reported the incident to the bus company STCP.  Within a five days they replied offering an apology, and referred the ramp for maintenance, they provided clear information on how to file an insurance claim. Only my dignity was injured so we did not pursue that option.  We were very impressed by the quick response from STCP.

The next day we were leaving early so we stayed in and cooked up a storm, with seafood and produce from the local market we whipped up an Arroz da Marisco (Seafood Rice) washed down with plenty of Vinho Verde.  The next morning we were blearily eyed, but happy as we headed back to our homes, us south to Lagos and our friends back across the pond.

Have to say overall we preferred Porto to Lisbon (sorry Lisbon we still love you) but the people in Porto were friendlier, the city more compact, the tile work and monuments stunning, the food delicious and affordable. We will be back.