In January 2018 Constance and I were present as the votes were counted on the Lagos Citizens budget initiative (Orçamento Particapativo). We were excited and hopeful after a few months of hard work to see if proposal 18 we had authored was successful.

In Lagos and many other cities in Portugal there are initiatives where citizens may submit their ideas to the local council and if approved as technically feasible they are put to the voters.

Our proposal to improve the accessibility of pedestrian crossings by people with reduced mobility  in a section of Lagos was one of 34 that made it to the ballot for 2018.

To be considered we had to submit a written description with photos and give a brief presentation in front of the mayor and city officials.  I am functional in the Portuguese language but by no means fluent, so I was understandably nervous, the public officials were very supportive and encouraging. We were the only ex pats engaged in the process.

In the lead up to the vote we made simple flyers on our trusty home printer.  In campaigns it is not always important that you have a budget for very slick promotional materials.  A simple home made black and white flyer with clear info on when, where and why,  is very effective, especially when put directly into a persons hands.  We handed out the flyers at events and in front of city hall and left them at a few local businesses.  We also used social media, email reminders and a few phone calls to update people on our proposal and on where and how to vote.  I also authored an article on the proposal that was published in Tomorrow magazine. 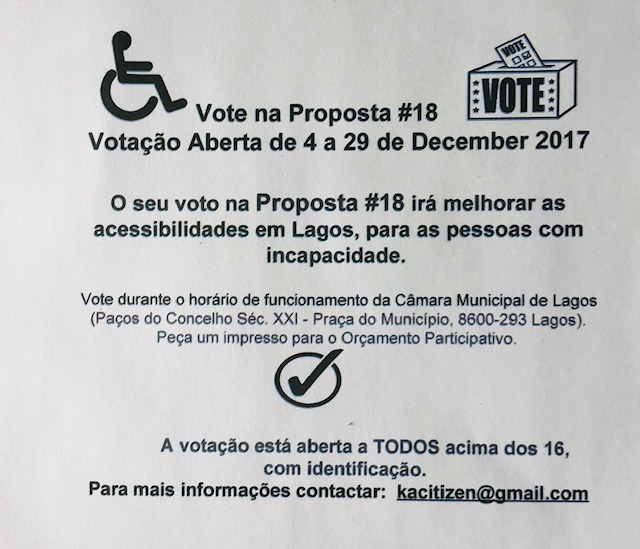 We used our printer at home, 2 per page. We had an English version also.

We were thrilled that when all the votes were counted our proposal came in first place in Lagos and third place overall in the county, meaning the project would go ahead.

After a few days of excitement we wondered when and how the proposal would get implemented.  We inquired at city hall if there was anyone we could speak to and were referred to Engineer Jorge Cardoso.  We asked if we could please be notified and consulted on the project.  He told us to check back after the summer.

In September 2018 we asked for an update and we were referred to city architect Catarina Pereira. We asked Catarina if she would walk the neighborhood with us. Then Constance could show her in person the difficulties and dangers faced by a person in a mobility device in using the pedestrian crossings. She told us after that it had been important for her to see in person what it was like for Constance as she tried  to navigate the public sidewalks and roadways. Note: Cities should have at least one person with a disability that they consult with on all public planning,  construction and renovation works.

We asked when the plans would be submitted and when could we expect work to begin. She said to contact her in the new year.

In 2019 we repeatedly asked for updates and were eventually told by Dr.a Helena Martins G. Moira’s from the urban division that the work was put out for public tender in December 2019.

After the vote we were sent the the certified election results. Nobody  from the city reached out to congratulate us, update us or inform or involve us with implementation.  Our inquiries have taken sometimes months to answer. These initiatives are seen as a way to get citizens engaged in their local government and it is a great opportunity that we are grateful for, however those citizens that do engage should be given the courtesy of transparency and encouragement.

As of today almost two and half years since being approved by voters the project has has still not moved forward, however a very large luxury condominium project in the same neighborhood is well under way; with construction on it even continuing throughout the covid pandemic restrictions.

You can be assured we will continue to advocate to implement the will of the voters who approved this project and on behalf of all people with disabilities who would like to cross the street in safety. 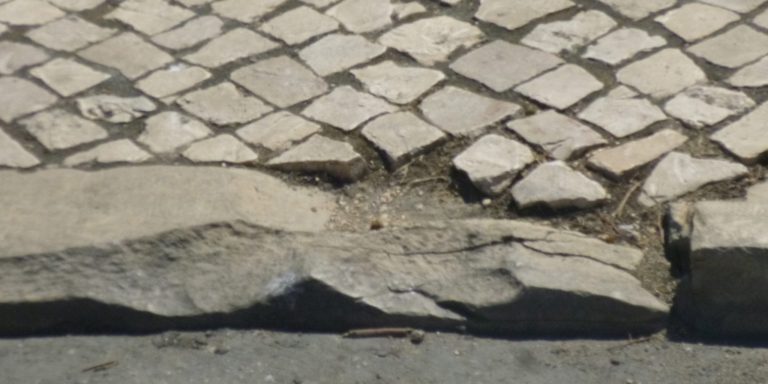 This curb is dangerous and will damage tires 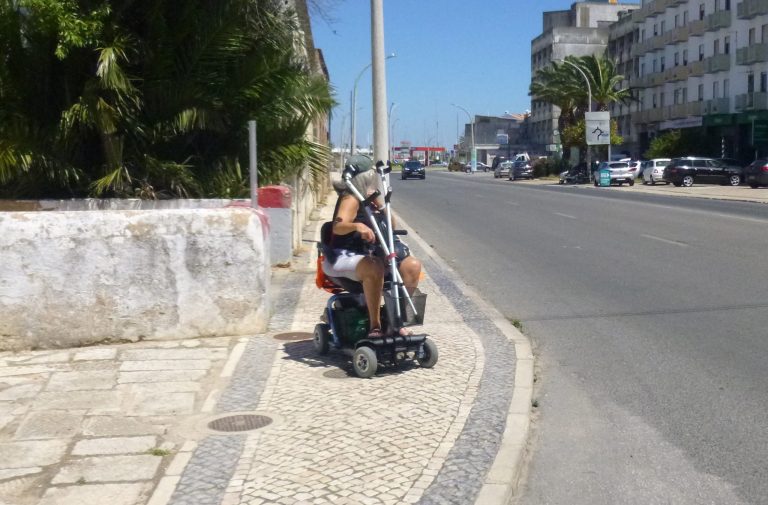 End of the sidewalk, into a busy road.