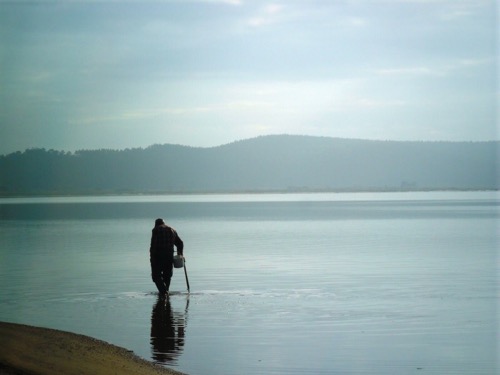 Will Hike for Food From our little city, on a whim, we can catch a bus or a train and in ten minutes and an euro be at the Obidos Lagoa, the calm bay of Sao Martinho or just on a cliff staring out across the expanse of the Atlantic (my favorite ocean) and waves crashing on the rocks below. When it’s warm we swim, when it’s cold we hike.

Never having been a “hiker” hearing that I was going to be hiking didn’t really appeal to my lazy Americana-five-hundred and three channel watching inner brat. Once I realized it was really just a nice stroll in good shoes with cool accessories such as a backpack and treats, it became something I really enjoy. Our latest hiking expedition was to the tiny village of Nadaduro to hike along the Obidos Lagoon, or Lagoa.

Obidos Lagoa is just not your everyday lagoon, it’s unspoiled, splendid, full of fish and fish-like creatures and algaes and mollusks and men so gnarly fisher-type that they can look real in the big boots and hat type of lagoon. The fishermen are the only ones allowed to fish with a motor on their little wooden boats. This Lagoa has a research station and scientists, it is special.

This hike had been tried once before, but we went the wrong way and ended up at the swampy part, nice but not really a proper beach hike. So, with the right directions (we turn left at the ostriches instead of right) we were off exploring.

On a chilly, but sunny January day, the bus drops us at the church square. We walk up the street until we see the ostriches, really, there are two very tall ostriches (I love that word) surrounded by a rather short fence, considering. But, there they are looking us over. Take a left and walk a while past the half built new holiday homes, wondering if they will ever be finished (recession ya know, it’s everywhere). Then we continue past the beautiful Casa da Paz, it is a really beautiful holiday kind of upscale but “zen-ish” in a very Portuguese way, collection of attached casas that look like one nice estate, it really would be the perfect place for our plans to save the earth. Won’t even have to change the name. Of course we would replace the decorative garden with organic veggies and fruit trees and go solar. And we would share….room enough for everyone. Let’s talk; there would be a plaque involved.

Down the steep curvy hill and BAM, mãe nature has stopped us in our tracks. Such peace, such beauty, serenity and solitude. A magical place, the smooth water rippling with the movement of, not fish, but something that lives like a fish, but doesn’t move like a fish…hmmm, ah…eels! Specifically, we find out later, enguias, are the name on the menu and very tasty. I happen to adore eels. The sea grass mostly free of the detritus of humans, oh there is some junk, but not as much as I would have expected.

We walk watching a fisherman getting ready and going out to try his luck. His boat is named Alda Marie and we chat; Who are Alda and Marie? Daughter? Wife? Mother? Saint? Fond memory? We take guesses on how a neglected boat ended up nestled in the sea grass. I found it sad, all its friends bobbing about and it being stuck on the sand worn out by the elements, bravely hanging on to its bits of blue paint and yellow trim.

Then we saw a melon. It was a rather large melon. Well, that’s odd, and so are those oranges and assorted fruits scattered about. If you are going to have litter on the beach, that is really nice litter, very cheerful. But, how did it get there. This was not a forgotten picnic, this was a bin of fruit. Hiking further along (or, walking with accessories) still pondering the fruit, out of some sur-rural dream, was a very large dead goat. I just stood there saying “oh, oh, oh…..” and pointing. The goat was quite lovely, brown with some nice long hair, still very goat-like, smiling at us with its nice straight teeth. On closer inspection (once we got past our shock) we saw a rope tied to its back leg. Obviously, it was someone’s goat but made a mad dash for freedom only to end its goat incarnation down the lagoon from a melon.

We walked on after spending time with the goat silently enjoying the clever abundance of nature (after all, we did just find the meat course of a very grand banquet) each of us silently wondering “how the hell did that goat get there, then, what about the fruit?”

The water was sparkling in the sun and it became so warm I was able to strip down to my T-shirt. Wished the goat a good journey to its next incarnation and followed our footsteps back to the hill to Nadaduro. Turning at the ostriches we headed to the café whose name shall not be revealed, we can get a bottle of good Portuguese lager for 60 cents. A vinho and a beer is under a euro, want to keep it from getting trendy!

From the café’ patio I made certain the goat across the street was still there. It was safely tethered to its tree, bleating away. At least one goat was accounted for. So what happened to the Goat of Lagoa Obidos? Here is the unofficial explanation:

The goat was at the end of its rope, it ran off to find whatever a goat wants to find, crossing the street it was hit by a fruit truck. Wounded, it staggered onto the beach and collapsed as the fruit rolled. The driver paused, being Portuguese thought “that’s life”, the goat became the anecdote do dia (the day) at the café’ over a bica (shot of espresso) and brandy before going home to his bacalhau and O Preço Certo. (note: photo of goat tastefully placed at the end of the story so you only have to look at the dear thing if you want to…and you know you do.)