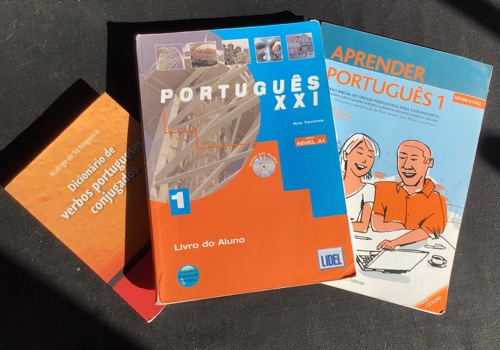 The Portuguese class is made up of a mixed platter of people from all over Europe, plus two Americans besides us.
We have enough English for a scrum, the Citizen among them (I am throwing the Scot and the Welsh in the mix). Then an adorable older couple from France, she must have been quite the beauty in her day, she is so lovely and so charming while playing at learning Portuguese while her husband feeds her the answers.

Then, this week, the Eastern bloc appeared. Two Vladimirs and a Svetlana from Russia, a woman from Moldavia, Marianna from Hungary, a scattering of Ukraines. Everyone in the Eastern bloc all seem to drive nice cars.

Ah, a wonderful U.N. of learning, all of us in little chairs, sitting at little tables at the Escola D. Joao II, without the tension of the U.N.....thankfully.  Three nights a week, Tuesday (Terca), Wednesday (Quarta) and Thursday (Quinta). Each lesson one and a half hours a week and lasts until June. The class is free and bonus, we just found out we are being paid two and a half Euros per class to attend, what a country!

The Professor, Fernando (most men are named Fernando here, the real estate agent, the attorney, the guy to stay away from in the village, all Fernandos). Our Professor Fernando has repeatedly impressed on us the secret to Portuguese is to know the VERBS. Past, the present, the future, the formal, the informal, the masculine, the feminine. Of course all these have many  exceptions. Turista is not feminine or masculine, just because it ends in an “a”. But if you refer to a male doctor as a “medica” and not a medico and use the “tu” and not the “voce”…oh, next thing you know he is taking out the wrong kidney!

At least, that is according to the Professor. At the café’ enjoying a Sagres (local beer) after class you get a different story.

We have hand outs. When I was a kid in school I loved my hand outs. The only thing missing is the smell of the purple ink from the old timey machines they had before copiers. The first lesson is how to introduce ourselves. It’s been 3 weeks and I am still getting it wrong. Eu chama-me Constance. My name is Constance. There, that is correct. One of the truly terrific things about Portugal is no one thinks of shortening my name to Connie, Constance is a typical name here, no one blinks an eye at it.

So far, we have, in 3 weeks, maybe not learned, but have had lessons in introducing ourselves, telling people where we are from, numbers, how to pronounce the alphabet, the masculine and the feminine words and how to use the verbs correctly, countries names in Portuguese, Also, good wines produced in Portugal, best place to get a pastel de nata in the city where we are living (wonderful pastry), some history, why Portugal and Spain have this love/hate relationship going, why the U.S. doesn’t have culture (a very typical conversation with anyone from Europe) and a few standard Portuguese jokes.

It’s been fun and really frustrating. The citizen is doing really well and is having conversations with people. I have yet to get there, but I will. Every week I can understand more of what people are saying around me and catch more words. Even say a few.

Do me a favor, next time you hear someone say, “Hey, dis is America, dey should be talkin English!” Take it from one of your own, it is not easy. Think about it, I am very lucky to land in a country that cares about encouraging immigrants to learn the language. Even pay them to go to class and it takes time and patience to learn.

You see a new Americana(o) or or a new resident wherever you live, speak slowly, they may be going to night school.

It's been about a decade since that class.  Kevin has become almost fluent, he can give speeches, advocate, chat and bargin in Portuguese.  As for me, it's a bit better although I use a language I call Con-tuguese.  It's a mix of English and Portuguese...with the addition of many blank stares.  As Churchill put it "nevah, nevah give up"!